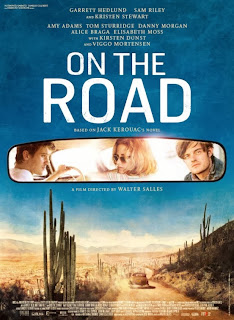 When it's over, life is a road trip, and sometimes you run out of gas. The film's title is appropriate as it follows a would be writer (Sam Riley), a wanderer (Garrett Hedlund), and the woman (Kristin Stewart) that share their beds and affections with across 1960's USA. This is not a mainstream film and definitely, not for everyone. It is not linear, where the characters go from point A to point B. I mean, physically they do, but emotionally, they are all over the map. I think they are sex-crazed, weed loving youngsters in search of self discovery and their purpose in life in a time when America demanded people should be safe, normal, and unpredictable. The idea of conformity is what makes the characters act and react with their sense of free-spirit, which results in personal scarring. Based on the generation defining book by Jack Kerouac, the filmmakers attempt to examine the human psyche through the characters' reckless actions, taking them further from what they are seeking. There is emptiness and yearning in the characters, but I cannot tap into them. The casting does not work for me. The actors are awkward together, and in some scenes, such as the orgy scenes, the awkwardness works to develop the characters, but in general, the actors do not fit well together. Perhaps, this is the story's intent? Not sure, since I have not read Kerouac's book. I just know their presence does nothing to pull me into their lives. Dean Moriarty is a tragic figure, who wants to do good, but cannot fight the impulse to be bad. This is a role that needed charisma to work, and Hedlund did not have that spark to make me care. Marylou is searching for something tangible, but is too afraid to reach out and grab it. Stewart fails to communicate something unspoken. Sal Paradise is trying to find inspiration and direction, but gets derailed in the process. Riley has the innocence, but not the manliness to pull off the transition. I really like the concept of this story, its daring nature, and the cinematography, but do not agree with how it is packaged. Less focus on the explicit scenes of sex and drugs, and more details on the characters' lives would have given me greater insight to their motivations and inner longings.