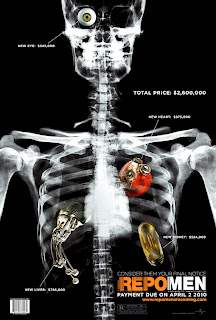 When it's over, waiting for a human organ donation is a thing of the past. In the near future, Artiforgs, artificial organs, can be purchased on credit and life can be good, but only if you can keep up the payments. Should you fall behind on payments, an institution known as The Union will reclaim your organ(s) by sending Repo Men to extract them from your body, leaving no concern for your health or death. Remy (Jude Law) is one of the best Repo Men in the company, but when he suffers a cardiac failure on the job, he is fitted with the company's best artificial heart and a huge debt, which he cannot pay. Remy is the hunter that becomes the hunted, a plotline that is nothing new to moviegoers. What I like about Repo Men is that it re-invents this reversal of roles through fresh lenses, entertaining the viewer, while urging them to think outside of the picture frame.

There are plenty of underlying messages amidst the blood and violence, but there are two that stand out:

(1) The idea of second chances – does it exist or is it an illusion? Is a person simply buying time to prolong an inevitable end? The film shows that second chances do exist in the form of Artiforgs, and The Union pitches the line, “You owe it to your family. You owe it to yourself.” But, as the film evolves, the viewer sees what The Union truly offers. Even the ending is an illusion to a certain extent.
(2) The concept of desensitization, where Remy extinguishes his emotional response to the wicked ways of his job, even though he knows it is cruel and unethical. However, all that changes when his artificial heart can no longer desensitize his actions, and he ends up a victim like so many victims he has taken life from. How can one man right so many wrongs, and Remy struggles with this notion. In reality, Remy represents the countless thousands of employees who work for corrupt corporations everyday all over the world, making money off the less fortunate and the unable. One important line Remy says in the film is, “At the end, a job is not just a job, is who you are, and if you wanna change who you are, you have to change what you do.” To me, this is a direct statement to society.

I enjoyed Repo Men for its approach, concept, and commentary, and would have rated it higher if I could get through three issues:

(1) The motive that caused Remy's cardiac failure is weak and unbelievable.
(2) Dead bodies, murdered and mutilated, lay everywhere in multiple scenes, but where are the police? Does The Union control the police? Law enforcement is never fully developed or explained.
(3) The love story between Remy and Beth (Alice Braga) is sweet, but completely unrealistic without the necessary build up.

If you can stomach the mutilations, then this film is worth a viewing. Then, ask yourself, how does it speak to you?