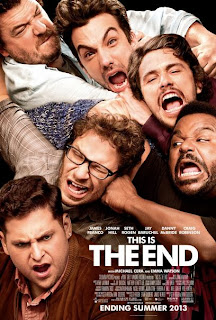 When it's over, and the end comes, make sure you're not in James Franco's house. I will admit, I laughed more than I thought I would. The stupidity and idiotic behaviors were simply over the top. I don't think writers, Seth Rogen and Evan Goldberg, missed anything in their zany story about six celebrities (Rogen, Franco, Jay Baruchel, Jonah Hill, Danny McBride, Craig Robinson) who find refuge at Franco's house when the apocalypse happens. There were elements of the supernatural, Biblical references, gore, severed limbs, drugs, gratuitous violence, graphic sex, and plenty of foul language. Am I missing anything? Oh yes, plenty of penis jokes, which were not funny or seeing the devil with his privates dangling did little to enhance the story. The Rapture from 1 Thessalonian 4:17 was the only human element of the story, because it forced the characters to re-evaluate their behaviors towards each other and humanity, so they may be chosen into heaven. Without this plot line, I think the film would have been a senseless romp. This film was primarily a comedy before it was a horror film, so viewers should prepare themselves for the crude antics of these comedians. This is the End was not the best comedy I've seen nor was it particularly intelligent, but it was certainly unique, and it surprised me. It had a well picked cast to pull off director Rogen's vision of the end. Aside for it's shortcomings, I liked it a lot!