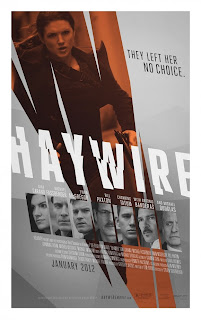 When it's over, relative newcomer to the silver screen, Gina Carano, kicks butt as the hard as nails, and sometimes feminine, covert operative, Mallory Kane, who seeks retribution after she is double-crossed by her handler (Ewan McGregor).  Having a strong background in MMA (Mixed Martial Arts) specializing in Muay Thai (a combat sport similar to kickboxing),  Carano was well casted for this role, and serves to be the highlight of Haywire.  However, having the pleasure of watching the woman in action, doesn’t save the film from its shortcomings, mainly, a weak storyline with too many loose ends.  It suffers from too many players and not enough playtime.  We have all these violent fight scenes, but none of them serve to build up the story or the characters, except who’s a better fighter. Some questions that leave the viewer hanging are: Why the elaborate deception when the journalist could have easily been killed?  What’s the purpose of setting up Mallory?  What’s the deal with the guy in the car when Mallory makes her getaway at the diner?  And what’s up with the title?  It’s catchy, but hardly relates to the film.  Mallory wants revenge, but she’s hardly going haywire about it.  Clearly, the fight sequences were the driving force of the film, and because of this, a better selected cast of male action stars would have served the film better.  Don't get me wrong, I liked the cast, and the sequences were well choreographed, but the men (including Michael Fassbender and McGregor) Carano fights just aren’t in her league – physically or in skill.  Channing Tatum fits the age, but not the skill.  She didn’t have a chance to fight Antonio Banderas, and although I like Banderas, I don’t think the fight would have amounted to much.  The filmmakers should have included some form of fighting between the two, since Carano had already fought half the cast.  How about a gun fight or a sword fight?  Some names I would have really liked to see her go neck to neck with are Jason Statham, Vin Diesel, Dwayne Johnson, Daniel Craig, or Christian Bale.  Any of these actors, or all, would have given her some serious competition.  Interesting enough, Carano will have her chance to meet her match as she is reported to be starring opposite Diesel and Johnson in the upcoming The Fast and the Furious 6.  She’s attractive, she’s tough, and she isn’t afraid of the camera.  I think she’ll go far in Hollywood.  Rounding the cast of big names are Michael Douglas and Bill Paxton. 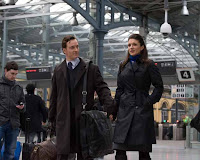