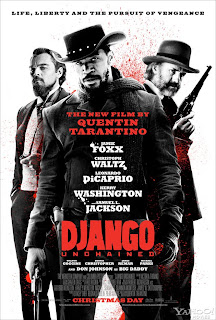 When it’s over, Jamie Foxx roxxs as Django, the slave turned bounty hunter in this pre-Civil War flick about revenge, justice, and bodies for sale.  After being freed from slavery by Dr. Schultz (Christoph Waltz), Django vows to find his wife (Kerry Washington) and rescue her from bondage from a ruthless plantation owner (Leonardo DiCaprio). This film is quintessentially Quentin Tarantino. It has all the trademarks – memorable characters, dark humor, great casting, stand out graphics, a well-chosen soundtrack, and plenty of violence. There are plenty of faces from the past that will make you say, “Who is that? I know that face.”  Actors include Don Johnson, James Remar, James Russo, Franco Nero, Tom Wopat, and Lee Horsley, who portray odd characters that amplify Tarantino’s dark humor.  Foxx, Waltz, and DiCaprio offer solid performances, representing three distinct classes – slaves, sympathizers, and slave masters. Samuel L. Jackson’s portrayal of the black man’s hypocrisy is grippingly real and, at times, disturbing. It is definitely his best performance since Pulp Fiction. There are many odd-ball moments, one in particular is the KKK Clan masks, which Tarantino includes to poke fun at the organization. Overall, I thoroughly enjoyed this film, despite the controversy surrounding the “n” word.  At first, it’s uncomfortable to hear, but the word quickly becomes ingrained into the dialogue.