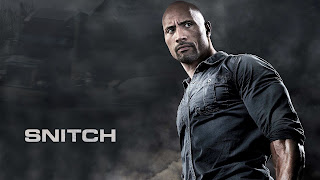 When it's over, where's the action? Dwayne Johnson is John Matthews, a father who makes a deal with the Drug Enforcement Agency (DEA) in order to free his son (Rafi Gavron) from prison. Snitch was completely opposite from what I was expecting. Here are some of the pros and cons.


(1) Johnson has been successful in action and comedy, and I could see this film was an attempt to try his hand at drama. But, unfortunately, the gamble doesn't pay off. I admired Johnson's desire to stretch his wings, and this film served to be a terrific stepping stone for just that.
(2) The character of Daniel James (Jon Bernthal from The Walking Dead), a convict who wants a fresh start, was the most engaging character; Bernthal brings to the surface a mixture of greed and love, where the blending of the two can make for one very desperate man.
(3) I liked the storyline about fathers and sons, and the things we do to protect our family; this was something that most viewers can relate to.


(1)  The film ran slow with little physical and dramatic action.  The last 20 minutes served to be the film's only real physical action.
(2) The casting was all wrong; the son was the key to making me feel connected with all the characters, because it was his action that set the story into play; and Gavron failed to make me feel anything; plus, I didn't like Johnson as Matthews. He didn't look the part of a suburban father, nor was he believable getting beat up by some street punks. Have you looked at Johnson lately? He is a hulk, towering over his cast mates.
(3) Lastly, the idea of the DEA making such a deal with a civilian would be unlikely, making the film's premise quite unbelievable.


What I think would have worked in this film would be giving Matthews a past (maybe an ex-con, or bodyguard) that connected him to the Mexican cartel, making his deal with the DEA more convincing and credible. His size and bulk would also work in the character's favor.