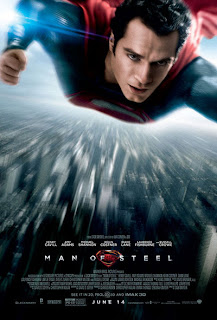 When it's over, I have to go against popular opinion and say that Man of Steel is a disappointment. The story begins on the planet Krypton at the birth of Kal-El, the baby destined to become Superman. The next two hours follows the adult Clark Kent/Kal-El/Superman (Henry Cavill), as he discovers his origins and attempts to defeat General Zod (Michael Shannon) from destroying Earth. Helping Superman is his long deceased father, Jor-El (Russell Crowe). Relationships and family are a big part of the film as Director Zack Snyder explores Kent’s devotion to his Earth parents (Kevin Costner and Diane Lane) and Lois Lane (Amy Adams). I like the time spent on developing the Kent’s story. Previous films only include it, but do not explore the impact Clark’s human family has on his development into Superman. The relationship between Clark and Lois did not feel romantic or believable. Their kissing at the end is awkward and out of place, because there is no leading up to it. I did not feel that emotional pull, that generally comes with superhero love stories. I did not care for Lois, whether she is in danger or if she dies. Actually, Adams is poorly cast as the iconic reporter. The pace is rushed and everything happens too quickly without proper emotional support to make the scenes believable. For example, Clark goes from Kansas boy to Superman within less than ten minutes, without the build-up of emotional shock and acceptance. All superhero stories have one thing in common - emotional conflict, where they have to accept their powers and their duty to exercise them for the benefit of humanity. Man of Steel lacks this core element. I would have liked to see Clark’s journey in finding his origins, finding his love for Lois, finding his purpose on Earth. Instead - Voila! Everything falls into place – the suit, the girl, the superhero status. I appreciate Snyder's reinvention of Superman, making him a darker, more conflicted being, a hero that must wrestle with his human counterpart, the emotions of anger, hate, and vengeance, as demonstrated in the end when Superman snaps the villain's neck. I think this act of violence, in particular, goes against the “Superman” code. I think this type of violence would work better if Man of Steel is an R rated film, giving Snyder the freedom to really explore the dark side of being a superhero and its ramifications. But, this is a PG or PG-13 rated film in North America, so some restraint is necessary, especially since one third of the audience is under 10 years old.