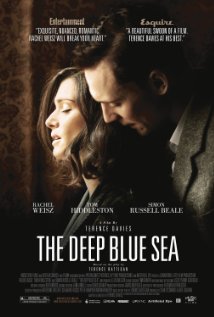 When it's over, what I'll remember most  was the haunting violin music, which described the inner tragedy and pain felt by the main character, Hester Collyer (Rachel Weisz). Set in post-war England, Hester is a passionate woman who wants to follow her heart rather than conventional norm, and in doing so, she has an affair with an air force pilot, Freddie Page (Tom Hiddleston), while destroying her marriage to a high ranking judge, Sir William Collyer (Simon Russell Beale).  Weisz and Hiddleston looked great together, in a non-matching sort of way. Their contrasting physical traits mirrored their differing emotional needs, making the pull between desire and complacency an ongoing internal tug-of-war between the two characters.  Weisz and Beale also shared differences in mind and body, which set off warning signs that the couple was doomed as husband and wife.  It was a look, a pause, a non-verbal movement, which informed the viewer that something was off with their relationship. Subtlety worked in this film's favour, but the film was anything but subtle. Many scenes were played out in gestures, such as a move of a hand, the tilt of the head, or a stolen glance. It was poetry in motion, and these scenes accompanied by violin strings said more in its slow urgency than words could describe. I have no complaints about the performances, as all three were wonderful and meaningful. However, great performances cannot elicit a mood, and that was where the careful choice in production design became a crucial element in completing the story. There were no rich colours to be found in this film, except for Hester's red coat, which conveyed the emotions of passion, ripeness, even shame. The use of browns, grays, and dark blues helped to evoke a feeling of gloominess and torment, while wet alleyways and rain suggested sadness and despair. The use of these elements created a sombre tapestry of fragility and vulnerability, and the red reminded me of Nathaniel Hawthorne's The Scarlett Letter, where shame was felt, but without regret, and as the characters share the same name, they also share in the tragedy and the hope their sins bring forth.