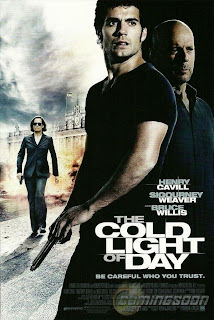 When it's over, this film felt like a tossed salad. Included are most of the ingredients of an international thriller, but generic fixings fall short of quality flavour. Spain, serving as a backdrop, added pizazz, but an underdeveloped story quickly fizzled my interest.  It was exhausting watching this film. The first half was a procession of chase scenes intermixed with interrogation violence.  I'm visually glued, but mentally, there's nothing to grasp. Only after an hour into the film did the story finally begin to unravel, and even then, the plot was thin.  So thin, the action simply shreds through the script, consuming the film.  Henry Cavill gave a relatively convincing performance as the son, Will, who suddenly discovers his father (Bruce Willis) is a government agent after his family is kidnapped and held for ransom by the Israelis.  The ransom was in the form of a silver suitcase, which the viewer never sees the contents of.  That was frustrating.  I think the film should have developed Will's character in ways that might have made him more likable, so that I would care about what he was going through.  His relationship with his father should have also been explored further.  Also, where's the love interest?  European backdrops. Love interest. They go hand-in-hand. Huge disappointment there, too.  Plus, if I could rework the characters, I would make some big changes in who lives and dies and when that person would bite the bullet.  Again, what a disaster of a script.  Cavill showed he had promise as a leading man and with that thought, I think he will successfully pull off the red cape as the future Superman, in Zack Snyder's Man of Steel due out 2013.  On the flip side, I have to mention my disappointment in Sigourney Weaver's role as the dirty CIA agent.  Her poor choice in roles have diminished her acting credibility, and that's a true shame, because I loved her in Aliens (1986), Gorillas in the Mist (1988), Galaxy Quest (1999), and Working Girl (1988), just to name a few.