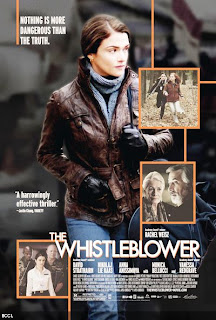 When it’s over, no justice can ever be found in a story about human trafficking, and as a viewer, there’s never any closure.  The film is based on the true story of Kathryn Bolkovac, an American cop who takes on the role of peacekeeper in post-war Bosnia.  Bolkovac (Rachel Weisz) arrives in Bosnia with the excitement and hope of rebuilding a country, but soon discovers the corruption that surrounds her.  I’m not too sure how accurate the film was to Bolkovac’s actual experiences, but I’m almost certain the themes were all right on - truth, justice, trust, betrayal.  I’ve seen my fair share of sexual exploitation films, and somehow, I’m never satisfied as the film fades to black.  There’s never any real resolution to the problem, leaving the characters frustrated and angry, and the viewer, myself, wishing I could don the Charles Bronson persona from Death Wish (1974), and take matters into my own hands.  Of course that would be morally wrong, but it sure would feel satisfying.  I thought Weisz did a terrific job bringing to life a character that desperately wanted the law to work in the victims’ favour, but eventually had to accept the flaws in her organization and the power of diplomatic immunity.  Whistleblower, like many other films similar in story, mirror the real world, and until the world can solve the problem, the films serve as voices begging to be heard.  David Strathairn had a small role, but shined as one of the very few “good guys” in a pool of dirty men.   Newcomer, Roxana Condurache as Raya, managed to give a face and a voice to countless girls who are forced into prostitution every day.  She had several difficult scenes, and in each one, she was convincing and unflinching, bringing to the surface a realistic portrayal of damaged women at the mercy of corruption.