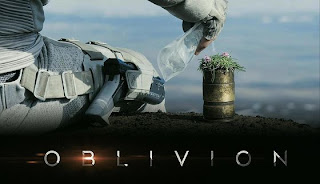 When it’s over, one viewing just wasn’t enough. I felt I needed a second viewing to help me fill in the blanks. I was left with questions unanswered, and at some parts, confused. Tom Cruise is Jack Harper, an individual assigned to remain on earth to secure its resources for the humans that have relocated to Titan, a colony on Saturn. With the help of his partner, Victoria (Andrea Riseborough), Harper spends his days fixing drones, defending the water supply from the aliens, known as Scabs, and having dreams about a woman named Julia (Olga Kurylenko), who he does not know. All is not what it seems for Harper or for the audience. Since, this film was built on its surprises, I will not divulge any examples that may be spoilers. Contrary to some viewers, I did not feel the story was predictable. In fact, I had no preconception of how the film would end. I was surprised by some of the plot twists, and not completely satisfied with some of them, in particular, the ending and who Sally really was. The film felt a lot like a “part two” of a trilogy, because there were events leading up to Oblivion that I wished I knew more details about prior to going into the film, such as how the Scabs arrived, and are there more than 52 Jack Harpers, and the origin of Sally.  Running just over two hours seemed too short for a story that was comprised of multiple mini-stories, and too long for a sci-fi love story with more flashbacks/dreams than it really needed. The flashbacks were the culprit for disrupted pacing. A few flashbacks in the beginning were necessary, but as they continued to resurface, the scenes began to drag. The chemistry between Harper and Julia wasn’t there. They looked awkward together. They didn’t look like a couple in love, past or present.  I think if the female roles were flipped – Riseborough as Julia and Kurylenko as Victoria – it would have worked better. A few things I liked about Oblivion was its visual awesomeness, like an IMAX film. The cool tech stuff, the “I gotta have one” helicopter/plane/giant touch screen table, and the house in the clouds. The pool in the sky was sheer genius. The stunning visuals successfully put me in the film. Oblivion had an intriguing concept, leaving me wanting to know more, and because of this desire, I can’t wait to read the graphic novel by Director Joseph Kosinski, which the film was based on. Not a fantastic film, but worth a viewing, just for the visuals alone.