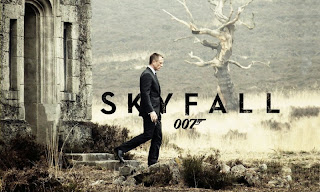 When it’s over, James Bond looks the most beat up he has been to date.  All the physical and emotional flaws make him more real.  He is a man with weaknesses, after all.  Bond (Daniel Craig) returns to active duty when MI6 falls under attack by an enemy from M’s (Judi Dench) past.  There is little spy stuff, gadgets, and exotic characters.  However, less characters and a straightforward storyline makes for a tighter film.  My favourite scenes take place in Scotland, where Bond resorts to using old-fashioned survival tactics.  This is a huge departure from traditional Bond storylines, but it works.  It’s fresh, unexpected, and because it takes place at Skyfall, Bond’s ancestral home, it gives the audience a glimpse into Bond’s childhood.  Director Sam Mendes combines past, present, and future as he weaves old characters with new faces and introduces a new M, Gareth Mallory (Ralph Fiennes).  Although the late Desmond Llewelyn is no longer Q, the new Q, played by Ben Whishaw is geeky hip and rather cute with his messy, mop-like hair.  I love the action, the stunts, the choreography, and Bond’s fit-perfect wardrobe.  Actually, the only thing I didn’t like about Skyfall is that it didn’t have a signature Bond villain, but this does not mean Javier Bardem’s character, Silva, is a poorly developed villain.  In fact, there are many layers to Silva and Bardem brings them out perfectly, bringing “creepy” to a whole new dimension.  He is one of the few Bond villains that are evil, while still engaging.  Plus, not since Goldeneye’s Sean Bean has a villain been at par with Bond.  It’s exciting and thrilling to watch Bond and Silva, and I have to wonder why Mendes didn’t pit the two in physical combat.  Daniel Craig remains my favorite Bond, and Skyfall has knocked Casino Royale (2006) from the first place slot on my “best Bond films.”