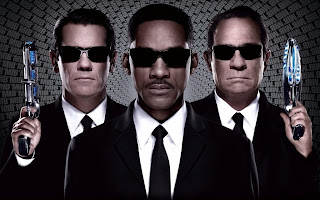 When it’s over, MIB 3 was so much better than the second, offering comedy, heart, and imagination, reminiscent of what made the first successful.  After a 10 year gap, Will Smith and Tommy Lee Jones return as Agent J and Agent K as the mind-erasing, alien fighting duo whose personalities are as different as their skin color.  In order to restore Earth’s timeline and prevent its imminent invasion, Agent J must travel back in time to 1969 to prevent the murder of his future partner, the young Agent K (Josh Brolin), from Boris the Animal (Jemaine Clement), an alien that wants revenge. The film stands alone, and I don’t think viewers need to have seen the previous two films to enjoy this third instalment, but it can be alot funnier if viewers are familiar with the characters.  And it’s definitely the characters that make this film work.  Brolin was brilliant as the young Agent K.  His voice, gestures, and facial expressions mimic Jones’ Agent K perfectly.  Brolin’s believability was impressive.  Emma Thompson as Agent O was refreshing, lending a bit of mystery surrounding her relationship with Agent K.  To be the third film in a relatively successful franchise, I thought the film would be produced on a grand scale, something resembling the massiveness of the Transformers films (2007, 2009, 2011) – bigger toys, bigger machines, bigger everything  – but to my surprise, it wasn’t, and that didn’t hurt the film in the slightest.  In fact, to be considered a summer blockbuster, the film was rather on the small scale in comparison to The Avengers (2012).  Maybe smaller is bigger after all.