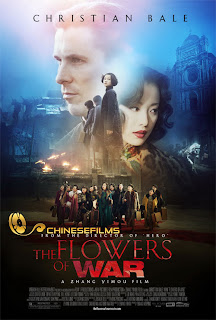 When it's over, Actor Christian Bale delivers another solid performance, and with renowned Chinese Director Yimou Zhang leading the way, The Flowers of War is so much more than just a historic war movie.  Certainly, the film features many themes that are associated with war, but Zhang has gone deeper into those themes to extract the essence of how those themes are played out through the characters.  Heroism is prevalent throughout the film, but is not defined by someone waving a gun or performing kung fu.  Zhang clearly shows that heroism comes from within;  it's internal; it's silent.  It's the sacrifices we make to protect others and the hope and humanity we offer others through our sacrifices.  In a time of war, despair and loss are inevitable, and hope can become the farthest thing within our reach.  The film shows that hope is something greater than ourselves and that it's worth fighting for and dying for.  Bale plays John, the mortician, who is sent to Nanking, China, during the early years of the Japanese occupation to bury a Catholic priest.  When caught in the crossfire of Japanese soldiers, John takes refuge in a church with a group of women consisting of convent school girls and prostitutes.  Posing as a priest, he plans to smuggle the girls out of the city.  I really liked how the film successfully blended cultures (the Chinese and the Japanese), social classes (the prostitutes and the students) and languages (English, Chinese, and Japanese).  Some films become lost with too much blending, but Zhang keeps a secure rein on the film and does a fantastic job at seamlessly fusing the English, Chinese, and Japanese dialogue.  I never felt confused, lost, or distracted by the subtitles as the dialogue jumped from one language to another.   Finally, this was one film that lacked character development, but didn't suffer because of it.  It would have been insightful to learn more about the main characters, but I didn't find the lack of development damaging to the overall film, because the film's mainly driven by the theme.